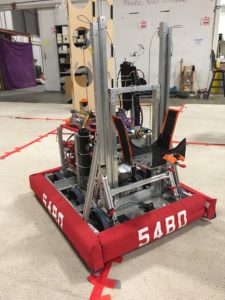 Built to complete the Destination: Deep Space challenge, Sol is our sturdiest robot with a combination of tried-and-true and new features we haven’t used before. She has the standard rectangular chassis with a West Coast drive train. On the front, she has a cascade lift with a plate to manipulate the field pieces that can go up to the second level of the towers. On the lift plate are holders for the cargo with a piston to shoot them out, and on the front is a back plate and rotating arms to hold the hatch panels on and release them upon reaching the towers or cargo ship. Sol also has three shelves of electronics on the back that can be pulled out like drawers. 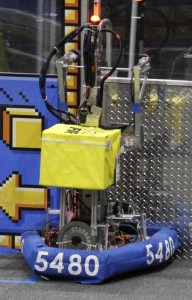 Built to complete the Power Up challenge, Aurora has a hexagonal chassis in the shape of a rectangle and trapezoid put together to afford enough space for everything but keep her small for maneuvering and fitting easily on the platform out of other robot’s ways. She drives with a modified west coast drive system to only use two driven wheels and a third caster wheel. To manipulate the power cubes in the game, Aurora has two mechanisms. The first is the chair, a plate with walls and a servo to hold the cube in that is used to deliver the cube in auto. The second mechanism is used for game play, and it is a plate with fly-wheels on arms that raises up and down to such in the cubes and lift them to the different heights required to play the game. This plate is driven up and down by a cable protector modified into a rigid chain run by a sprocket to push it up.

Built to complete the Steamworks challenge, Leah is small and light for maximum spee 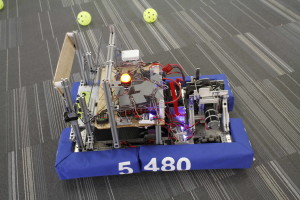 d and maneuverability. She has a four-wheel drive system with two omni-wheels for turning. She has a trapdoor on one side to catch the gears and release them onto the peg. On her other side, she has a winch to climb our rope with. It has a spoke that catches a loop in the rope and winds up. An interesting feature of this winch is it’s braking system. In order to stay at the top of the rope when power is cut at the end of the match, we needed to create a brake of some sort. To do this, we placed a metal bar at the back of the winch and cut ratchet holes into the winch side plates. When Leah is climbing the rope, the braking bar slides over the winch and doesn’t interfere, but when she gets to the top of the rope, the brake locks in to a cut in the side plates and prevents the motor from running backwards. 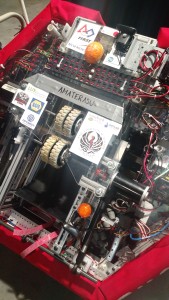 Built to complete the Stronghold challenge, Amy has a very different structure than Cindy. She is short to fit under the low bar, and she can suck in balls through one end and either shoot them back out that way or shoot them in the other direction up to eleven feet high. An interesting feature of Amy is that since she is so short, we had to maximize surface area so we could still fit all of the electronics on with a limited amount of vertical space. To do this, we went outside the box and made Amy an octagon. This is quite unique as most robots are rectangular. Another interesting feature that distinguishes Amy is the type of wheels she has. They are called mecanums, and they have rollers around the edges that allow Amy to not only drive forward and back and turn but also go sideways without having to turn. Along with the mecanum wheels, she has a suspension system that keeps all four of her wheels on the ground at any given time. This allows her to drive over varied terrain that she might tip and on not be able to get over if she did not have suspension. 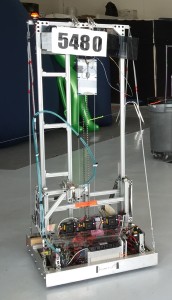 Built to complete the Recycle Rush challenge, Cindy was our first robot. She has hinged claws on a chain lift at the front, similar to how most forklifts work. These claws are passive and simply compress around the top of the tote, slip under the lip, and spring back out to hold the boxes tightly. She has a pneumatic brake to hold this tote carriage above ground, and she can carry up to three totes at once. She uses West Coast drive so she can turn on a dime.